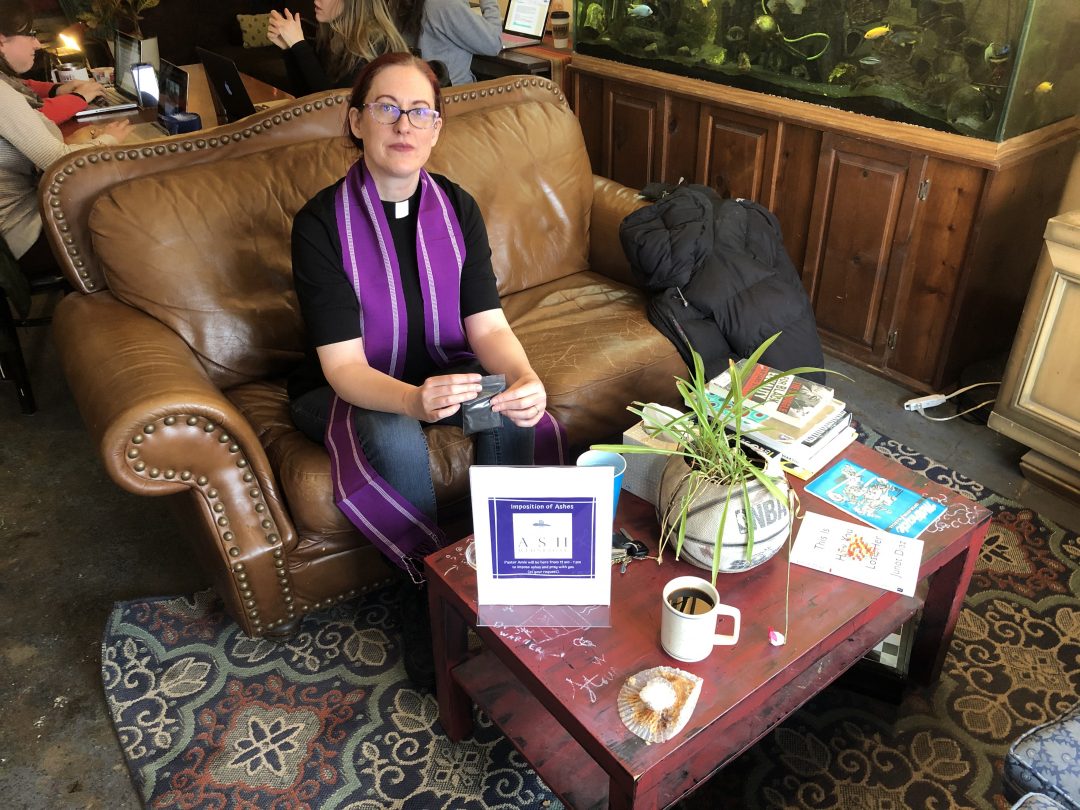 The LabOratory Church provides a safe space for health, healing, and hope in Indianapolis

She knows what it’s like to distrust others; how damaging isolation can be to recovery. That’s why she and her husband, Thaddeus Shelton, launched The LabOratory Church. This new Indianapolis church offers safe space for those with mental illness to worship, cultivate strong connections and seek healing.

New Church Ministry spoke with Pastor Amie about The LabOratory Church, one of the 1,034 congregations (and counting!) that have formed or become affiliated with the Disciples since they adopted the 2020 Vision in 2001.

Tell us about your new church’s name: LabOratory.

It’s a play on words. It’s a lab. But it’s also oratory, like preaching. We’re a new church with a focus on mental health and building community in new ways.

We really want to reach people who have been hurt by the church, people who are afraid of others. They isolate because they’re like, “I just can’t deal with humanity anymore.” We’re trying to create a brave space where people can be fully real. If they want to come in sad or angry or frustrated, or happy or joyful, they could bring their whole selves. We’ll still work with them, no matter what feelings or problems they’re having. I feel like too many churches try to be positive all the time. It has its place to be positive, right? But we can’t really minister to people if we don’t also name what is wrong, and name what we’re struggling with and have support in our struggling times. So, really, it’s a place to be whole and do relational healing.

Trauma psychologist Judith Herman talks about the three stages of healing. The first is about naming the trauma. You work through it in the second stage, like in the therapist’s office. The third stage is relational healing, being in relationship with each other. That was the stage where I had stalled. I felt like if I was fully myself, people would reject me. We want to be the place where people find healing in relationship.

We understand from what you were saying that this was a personal journey of yours because you’ve dealt with mental health issues and your partner is trained in therapy. Are these issues particular to the neighborhood that you’re in? Or are you addressing a local context of a wider problem?

It’s definitely a wider problem. I think it’s cultural. You have to start with yourself and the people around you. It’s a concentric circle sort of thing. We name individualism as the problem. That’s what damages relationships. All the sins that break our relationships are based out of our culture saying that individualism and competition is the only way to survive. But that’s actually the only way to make sure that no one survives. We are created to be relational. So, we have to learn how to be in relationship with each other, despite the cultural norms telling us, “You can’t trust anyone, they’re always your competition. They’re gonna’ steal your stuff, they’re gonna’ steal your glory.” It’s a scarcity mentality, right? We’re trying to emphasize an abundance mentality, a mentality of mutuality, a mentality of generosity, compassion and, shocking, “love your neighbor as yourself.”

Is your team-leadership style a response to individualism?

Absolutely. We’re really focusing on training people to internalize (the values of the community) before we give them more power over decision making. Most of the people on our launch team get it. But we’re in the early stages. We’re being very intentional about making sure that the values are the most important thing. We’re open to suggestions on how we do worship, on who we serve, all of that. But what we’re teaching people is that every question has to go through the lens of, is this supporting individualism or cooperation? Is this supporting everyone? Or is it self-serving? We ask those questions every time we decide to do something.

I’m the main person because Thaddeus has a second job as a therapist, but he is in charge of the mental health aspects. I am in charge of pastoral care and worship. But we talk everything through together. When I figure out what scripture to preach on, for example, we’ll sit and say, “What is going on in the world right now? What sort of mental health challenge fits what people are dealing with? And how does that tie to the scripture? And how does that tie to our mission?” I’ll read through his stuff and he’ll read through mine, and we’ll give each other feedback.

How is your community responding to the soul searching and in-depth questions you’re asking them?

They love it so far. I think they’re really understanding how it helps the healing. People have been drawn to us, to be in our launch team. They may have associations with other churches even. But they really like the fact that we’re going so deep, it’s not a surface level thing, and that we’re creating a safe environment. We’ve had some conflict already, but I preached on conflict resolution because I wanted, from the beginning, the bar to be set, that we are still human. We are not going to agree on everything. We’re going to misunderstand each other sometimes.

The key to building this type of community is that we have to be brave enough to be honest, and really deal with conflicts as they arise instead of the traditional way of just pretending like it didn’t happen, pushing it down, and developing all of these intense feelings that come out in other ways later.

Who are the current members of The LabOratory Church, or are you not at that point yet?

We have a solid group of people, but I haven’t called them members yet, because we’re still figuring out how we want to name that and what that looks like. A lot of the people that we’re reaching, in addition to the unchurched people, are fellow ministers. We have one minister who’s very active, and she’s a chaplain, and she also serves at another church, but she comes to our church and Bible study as well. We have two elders from another church where I used to serve who are not members because they’re members of another church, but they’re still very instrumental in our programming. So, we’re still figuring out membership.

I’d say if we counted the people who were regular worshipers, we probably have a list between 15 and 20. So that’s a pretty good number for us. We’re not in it for high numbers, we’re just getting to the people that need it and want it. It’s a good mix of people too – younger, older, middle-aged, single families, gay, straight, Black, white.

Because you’re an interracial couple, do you think that people of color consider The LabOratory Church a safe space to worship?

We did a statement of values, which I posted on our website and is in every single bulletin. I usually go over it every single service. We are very clear about everybody being welcome. We named the inclusivity across economic statuses, races, genders, sexualities. We name that we want honesty. We want you to be fully who you are, and we will accept you. In addition to us being interracial, I think, having that constantly represented, stated explicitly, helps people know where they stand.

Eight months ago, you planned to lease a storefront by January, meet on Saturday nights, and have a New Church Ministry coach. Have you met those goals?

The storefront required way too much work. So, we’re planted inside another church that hosts five congregations. I love that. That’s part of what we loved about being there. Emerson Avenue Baptist Church is right on the border of our neighborhoods. But it also meant that we could only use certain time slots. We now have worship online once a month. But we’re thinking about increasing (the frequency of worship) online to twice a month, (eventually alternating between) once a month online and once a month in person. I’ve also been meeting with a coach. It’s Steven Smith. I’ve been meeting with him for three months. He’s helping us address our bylaw and constitution questions. We’re slowly working toward our goals.

You’d been having in-person gatherings in the neighborhood coffee shop, right?

We did Bible study and my office hours at the coffee shop. The coffee shop that we used, Rabble Coffee, they have just an incredible group of people. They’re very concerned about the neighborhood, they let homeless people come in there without buying anything. They will give them food and they’ll give them clothing and they’re like a church. They’re perfect. They’re not religious, but they do the work that religious people should be doing. So, it’s a really great fit.

Both Thaddeus and you attended Leadership Academy. How did that event impact your ministry?

The packet on demographics that we received confirmed that we had picked the right neighborhood. I liked that we went over budgeting processes. That was very helpful. One of the best things was the relationships we made with fellow church planters. Being a church planter can be lonely. Bouncing ideas off of others going through the same thing was awesome.

What do you see in The LabOratory Church’s future?

I personally have connections with people all over the world, because I was a traveling photographer before I started doing this. I like the idea of us being a dual-type of church, where we do serve our local Indiana neighborhood, but that we really focus on our online ministry to reach people who don’t want to attend (traditional) church who still have questions. We’ve got our Givelify link, YouTube channel, and social media up. We’ve got our messaging out there so that people looking for a place where they can be themselves will find us. We could go global because we’re trying to do life in a new way. It’s not just about church, it’s about how can we live together better as humans.

New faith communities like The LabOratory Church are supported by the Pentecost Offering. Each year, half of what you give stays in your Region to support and sustain new churches near you. The second half helps train, equip, assist, and nurture leaders across the United States and Canada through New Church Ministry programs. Join us in celebrating the 2020 Vision by making a gift through your congregation or the Disciples Mission Fund website. This Special Day Offering is received on May 31 and June 7.

4 thoughts on “The LabOratory Church provides a safe space for health, healing, and hope in Indianapolis”