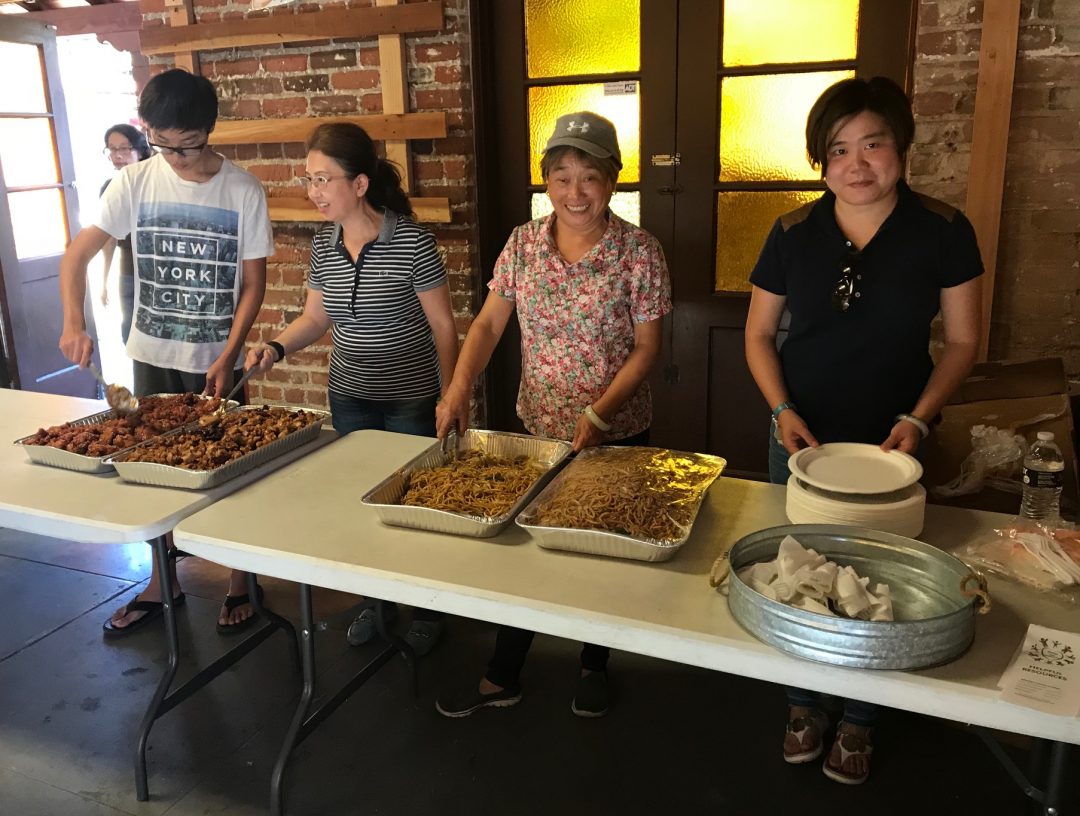 “We walk with our community:” How new church planters are doing ministry

UrbanMission, a joint congregation of the United Church of Christ (UCC) and Christian Church (Disciples of Christ), lies at the intersection of White Avenue and Ninth Street in Pomona, CA.

The city sits just north of a men’s prison, and is one of the areas in which formerly incarcerated individuals are released. South Pomona struggles with gang violence and drug abuse.

None of that was a deal-breaker for Rev. Al Lopez, the congregation’s Lead Pastor. He felt called to plant a new church where folks could be themselves and still belong.

In this New Church Ministry interview he shares how UrbanMission reframes church in the 21st Century.

We are a church without walls. We have several ministries that are interconnected and interdependent… plus we get together and worship.

In our Open Table gatherings, people from all walks of life create a sense of belonging and provide a free meal.

Rev. Nora Jacob, our Restorative Justice Minister, goes inside Chino State Prison every week and facilitates several groups. She also heads up the Reentry Coalition, which assists, and provides a place for, people coming out of incarceration.

In 2014, we founded UrbanMission Community Partners (a non-profit organization) with a vision and purpose that really aligns with that of the church, although it’s an independent entity.

So UrbanMission has been kind of like a seed planter. UrbanMission Community Partners takes those seeds and helps them grow.

What was the impetus for you to plant UrbanMission?

A few years before starting seminary, my theology began to change. As it expanded from the faith that I had grown up with, I found myself feeling less and less part of my community because of our different insights and interpretations of scripture. There’s a very dualistic way of understanding who’s in and who’s out.

They essentially handed me the keys once we looked at the property. A congregation there had closed. Rev. Villanueva said, “You do what you feel God is calling you to do and just keep reporting to us. You’re part of our staff.” They’ve given us the freedom to really pursue this the way that we feel led.

I had: an empty building, no people, no connections to the (local) community. So, I started looking at communities where I had connections.

I had just started seminary at Claremont School of Theology. I was meeting people who were passionate about several issues that overlapped with (the neighborhood’s) needs. (We discovered) an organic fit.

I happened to know Rev. Jacob through other regional work. She started our prison ministry.

I was introduced to Rev. Stephen Patten by the Disciples Seminary Foundation. Steven is our Community Wellness Minister, and in his role, he addresses drug abuse in our community.

My main focus is the Sunday morning congregation.

The three of us approach this planting of a new church as a team.

This collaborative leadership model is one other new churches use. How has it helped you be successful?

Our congregation is in a community that’s financially challenged. So, we knew going into this that we needed to approach church planting in a very entrepreneurial way. We were not going to be looking at the income from the Sunday morning gatherings as the main revenue in order to sustain the ministry and all the other work that we do. That shapes our understanding of leadership and what each individual contributes.

We recently had our very first church council meeting. It’s made up of people who had previously come to UrbanMission that had never even attended church, or had never been part of church leadership, or were against the thought of church. We’re playing into their strengths.

It has been a learning curve, especially because this past year was particularly difficult for me on a personal level. I haven’t been able to do the kind of training that I wanted to do. But that’s the wonderful thing about church. When you empower people, they take the ball and run with it.

So, they each bring their gifts — that has made us successful. The impact we’re having in our community has gone above and beyond what I ever thought possible.

How do you measure that impact?

We use some traditional metrics, such as: How many families are being fed? How many community groups are we housing in our Community Wellness Center? The more life-changing (measure) for me has been, how many lives have been transformed?

This woman showed up at one of the nonprofit’s art shows, where we highlight art created by people who were formerly incarcerated. This woman looked very familiar. Eventually, Nora pulled me aside and said, “You need to hear her story.”

We had her on camera sharing that she actually was one of our guests on Sundays. She was houseless and dealing with addiction, so the only reason why she was coming was because she was invited with no strings attached. Just welcomed. She took that and went from there, little by little. Now she is a counselor working with people that are still on the street. She’s completely turned her life around. She came back just to show her gratitude.

She said: “This is where my life changed because of the way that you greeted me and what you were providing.”

Our first moderator is the very first person that I met when I started in Pomona. When he found out that I was a pastor, he said, “I don’t want to offend you, but I don’t trust pastors.” We spent about six months developing a relationship over coffee, over food, over imagining what could happen in that place. Eventually he told me, “I want to be the first member of your congregation.”

He went from having some really serious legal issues that prevented him from working, to becoming a contractor, to owning his own company. He’s been very successful at it, giving great prices to a lot of our congregations in the area. His company was hired to remodel the Conference offices.

All of that from a conversation that started with us being vulnerable with each other. Me saying, “Hey, I need help. I don’t know anything about property,” and him saying, “I don’t trust church. Here are all the things I don’t like about church.” And me saying, “Hey, here are all of the things that I don’t like about church, either. A lot of them match up. How can we change that?”

Do you feel like being a hybrid church has helped you folks do ministry?

Both denominations have wonderful things going for them, and they both have their unique challenges. I think for those of us who are somewhere in between the Millennials and the Gen-Xers, we have the ability to be part of both worlds, speak both languages – think in both ways. It gives us freedom to not be shackled by some of the things that would hold others back.

Case in point, I was asked, “What about baptism? What about communion?” Those two happened to be some of the contentious areas between both denominations. At that point, baptism was far into the future. But I said we will teach what both bodies believe, and then we will leave that up to the person to decide.

Having the congregation be in community with other churches both within our denomination and outside helps them see the way that they’ve been growing up in their faith with us. Sometimes a congregation from a well-to-do area will drop off donations. In the conversations after, one of our people will say, “Did you notice that they kept saying that they’re helping us?” It’s a very transactional way of doing mission work. They are able to tell the difference between the way that we approach it and the way that some other churches do.

How is UrbanMission responding to the COVID-19 pandemic?

Our leadership struggled to find an appropriate response that would honor our commitment to our community, while also ensuring the safety of our volunteers. We decided to continue supporting our community via an “Outdoor Open Table.” This includes distributing dinner in to-go containers and limiting contact as much as possible. Our food pantry continues to work with our partners to provide emergency food services during this time.

What do you see in UrbanMission’s future?

We’re just about to start talking with both denominations about the UrbanMission Training Center. We have learned lessons that can help a lot of churches, both established and new churches, even nonprofits. Several of us are trained coaches now, so we would do some coaching. And that’s actually really transformed the way I approach ministry, by just asking deep questions and just doing a lot of listening. It’s very much walking with, instead of trying to lead. I think that’s one of the things that the Church really needs to own.

Is there anything you want to add?

The importance of vulnerability. I mean, we follow a man that, depending on where your Christology is, made himself, time after time, vulnerable with those that he was with. It’s something that we’re trying to emulate. I think that has been part of UrbanMission’s success. We don’t see ourselves as an institution, but as part of a community.

UrbanMission, and the 1,034+ new churches–and counting–that have formed or become affiliated with the Disciples since 2001, are supported by the Pentecost Offering. Half of this Special Day Offering is used by New Church Ministry to coach and train new church leaders, and the other half is used by local Regions to sustain new churches. Join us in celebrating the 2020 Vision by making a gift online or through your congregation when this Special Day Offering is received on May 31 and June 7.