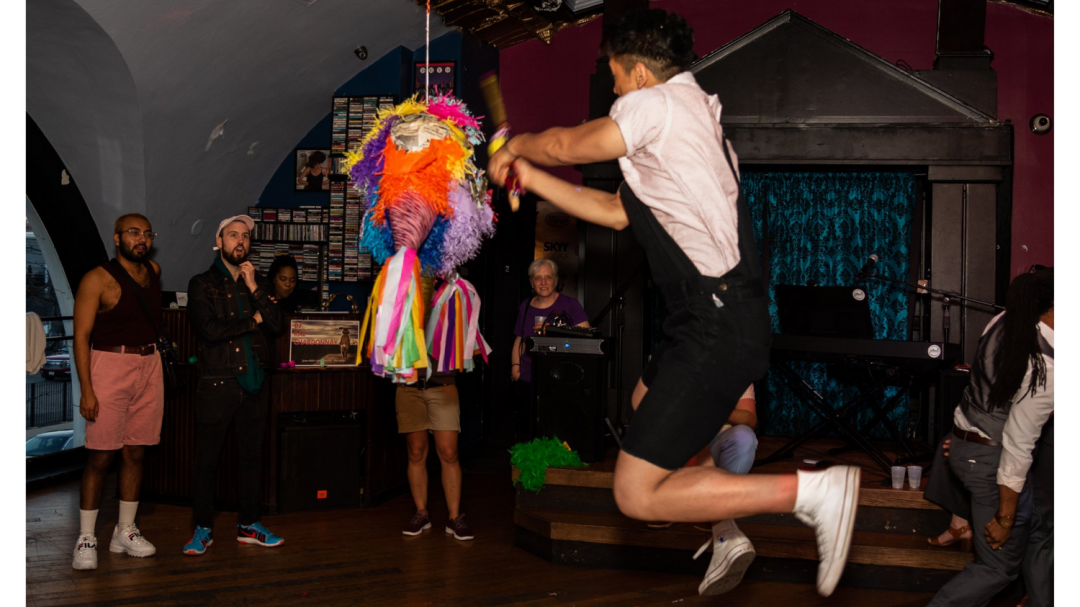  There is a Balm in Chicago

Rebecca Anderson grew up Evangelical, but as a young adult, she didn’t consider herself a religious person.

That didn’t mean she didn’t dip her toes in the waters of different communities of faith.

And then she attended a local church in Boston at the suggestion of a fellow non-religious friend, which changed her life. In fact, she describes the experience as her day of Pentecost.

“It was this big lung full of bright, fresh air,” Rebecca recalls. “I hadn’t heard the gospel in the way that I heard it that day. I could finally understand what they were saying.”

“I try to create conditions where people who need a particular translation of the gospel can hear it,” Rebecca says. “I see on people’s faces, when the way we do church speaks to them, and I see it when it doesn’t.”

So, who does Gilead Church speak to? It’s with, for, and by people who’ve been told or made to feel that church isn’t for them.

“If these stories, traditions, practices, questions, and the person of Jesus are compelling or in any way meaningful to you, they are yours,” says Rebecca. “I’m not making seats at the table. It’s not my table, it’s yours. If you are drawn to this, God has prepared it for you. My call to ministry is to let people know that and then get out of the way.”

Worshipers at Gilead include members of the LGBTQ+ community, young adults, professional activists, and in Rebecca’s words “a disproportionately large number of women.” Several members of the lay and staff leadership are performers, as one of the faith community’s core practices, which were developed when Rebecca attended Leadership Academy in 2015, is telling true stories that save lives.

One of these stories is about a recent addition to Gilead, who returned to church after a 10-year absence due to severe spiritual trauma. To curtail their fears about and suspicion of Christian institutions, this person researched Gilead online and tentatively attended a worship service. Afterward, they made a list of what they wanted from church, including praise and worship music a la Hillsong and authoritative leadership, the kind that had the answers and knew their answers were right. Gilead didn’t have any of those requirements, so they told themselves they wouldn’t return. But as the week progressed, this person questioned what any item on their list had done but harm them. What they needed in their life was love, and they knew that Gilead had that. Ever since they’ve attended every service.

“It’s a miracle,” beams Rebecca. “They told the story at church this past Sunday and it was heartbreaking, good, and generous.”

One of Gilead’s other practices is making beautiful, creative worship. While its liturgy, order of worship, and communion are traditional, Gilead’s creativity is found in how it chooses to gather with its people. Before the COVID-19 pandemic, they met at a bar, where they hung out and filled in story prompts. In the past, they’ve had worship on the subway and now they meet in a gym. Gilead also meets online, which Rebecca admits has been hard for her to do.

“Pre-pandemic, we were deeply analog because we didn’t want anything more on our phones, we were so done with it,” she remembers. “Gilead had always been this kind of doggedly in-person place. People tell personal stories that they consent to tell in a room to a specific group of people.”

COVID-19 also changed the way that the congregation threw parties, another one of their core practices. While throwing parties may seem like an odd practice for a church to embrace, for Gilead it’s about reclaiming a theology of joy, which has been absent from modern Christian tradition. Basing its practice on a Yale study that found joy was a marker of the life of faith in both Jewish and Christian scriptures, Gilead views Jesus as a party goer and God as a party thrower.

To that end, Gilead typically threw four large annual parties. It celebrated Easter with a dance party, complete with a DJ, communion, and a liturgical piñata. Every year, Rebecca’s co-pastor Vince insists that just hitting the pinata works, no one cares about the candy.

“We’ve got this one congregant who said, ‘we should get a pinata shaped like a gravestone,’ Rebecca laughs. “We thought it was so serious and on the nose. Couldn’t we just get a unicorn?”

These all stopped with the arrival of the novel coronavirus, but with creativity at its core, Gilead persevered. For Easter 2020, church leadership got people to contribute to its worship service, including award-winning poet Ada Limón, who kicked it off by reading her poem In the Country of Resurrection to the congregation. The following week, Rebecca and her colleagues purchased doughnuts from a local breakfast sandwich joint, fanned out around the city, and took doughnuts to congregants. Mindful of the health guidelines, staff members flung doughnuts through windows and placed them in containers lowered out of windows. They took communion to as many people as they could in the same way, adding a little table on the side of the street, which was used to do a socially distanced liturgy.

“We found ways to be together,” says Rebecca. “We had worship outside with everybody spread out. Only Vince and I were singing, and while I’m a big extrovert, I felt so exposed.”

This tension, one of curtailing your natural behavior for the safety of others, and what it does for your mental health, was explored in a 2020 sermon series Rebecca called Pity Parties. It featured true stories of the difficult times people were having during the pandemic, instead of glossing over them.

“There was that pandemic narrative where people would start off saying they were fine, continue on to a middle section of how they were really feeling, and then ending with them saying how lucky and privileged they were,” Rebecca explains. “We wanted to provide people with an opportunity to be honest.”

Of course, honesty and vulnerability come hand in hand, so she is always careful to say that Gilead’s dynamic is about building intimacy from where people are at, appropriate for their context, and true to their DNA. Ultimately, the people of Gilead don’t want church that is sanitized of authentic experiences, even if they’re messy. This commitment to sharing what Rebecca calls “high emotions” is what makes the people of Gilead more than fellow worshipers, it makes them real friends, incidentally the last of the church’s core practices.

“Early on, we received a grant for a project with and for young adults, which in this case was people in their 20s, so we studied how people come into community,” says Rebecca. “We found that making adult friends is notoriously difficult so there’s this loneliness epidemic. As a result of that study, “’making real friends’ became one of our core practices.”

This practice comes from the close relationship that she and her co-pastor Vince share. They met in grad school and kept in touch over the years, communicating via text and getting together once a year. On a trip to St. Augustine, FL, they asked what it would look like if they started a church together. Not only did she and Vince share the same affinities and commitments, but Rebecca also didn’t think a solitary leadership model was ideal. They started talking about it then and soon they were texting every day. Rebecca shared what she learned at Leadership Academy about mission, vision, and values and they decided that Gilead would be a church for two pastors. Rebecca quit her job and that same week, she and Vince learned that Bethany was searching for one full-time pastor. They pitched their idea of splitting the job and co-pastoring not only Bethany, but Gilead too.

“This was a big risk for Bethany,” reveals Rebecca, “but thanks to some good DNA and interim work, they took a chance and hired us.”

The church had a small number of worshipers when Rebecca and Vince arrived, so they approached their new positions as leaders of a revitalization project. While Bethany was a 125-year-old neighborhood church, it was progressive and had a young membership. Now Bethany is vibrant and growing its numbers.

Rebecca and Vince can juggle both positions because Gilead holds its worship services in the evenings. Each week, they’re both in leadership at one of the congregations, but one of them preaches and takes the lead on liturgy and the service. The following week, they switch positions and churches. Student pastors fill in their positions at their other congregation.

“I already know that working with Vince has been and will be one of the great and abiding joys of my entire life,” Rebecca reveals. “I’m just grateful.”

She’s also appreciative of the generous support from both the UCC and the Disciples of Christ, including the New Church/Ministries team of the Illinois-Wisconsin region, which has provided funding and just as importantly, encouragement.

“There’s mutual trust, so they’re not suspicious of our translation of the gospel and I’m not scared to ask anybody in the region anything,” says Rebecca.

Rebecca and Vince also try to be available to folks who would find their experiences and knowledge useful, especially new church leaders. At its core, Gilead is viewed by its co-pastors as a ministry of their respective denominations.

“I’m doing this work to serve God and the Christian Church (Disciples of Christ), which is the denomination where God found me,” Rebecca concludes. “I used to feel sheepish because I fell into this church, but it doesn’t matter. It is the place where God found me outside the empty tomb.”