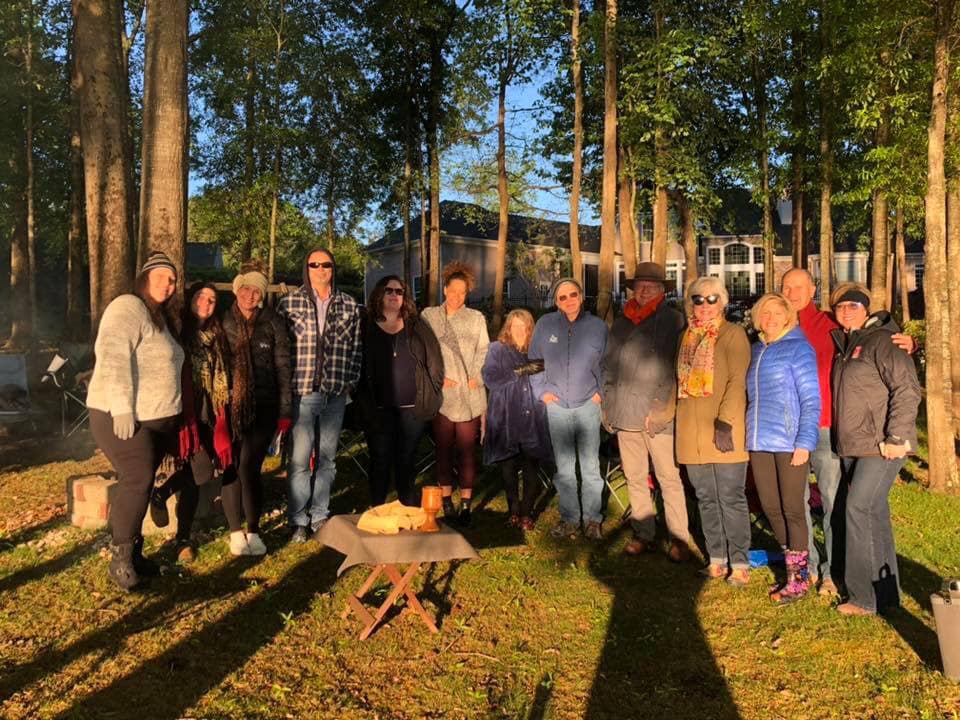 Finding a path to God with Ekklesia Global

Michelle Beech lives and works in Spartanburg, South Carolina. In her words, that’s not where she’s from, but that’s where God has her now.

Due to her father’s career as a minister in the Christian Church (Disciples of Christ), she’s lived all over the United States. So it’s fitting that her new community of faith, Ekklesia Global, has people joining their video calls from across the country and across the world.

Ekklesia launched in 2019, after Michelle had taken a break from church. Over the years she had filled almost every single position one could at a Disciples congregation and needed some time away.

“I felt the Lord leading me to do something new,” Michelle says in a recent interview with New Church Ministry. “Was that digital church? But how do we use technology to create something beautiful, instead of trying to force what we know works in a building to fit the medium?”

So in March of that year, she hosted a listening retreat to hear what her friends’ spiritual needs were. It turns out that many of them had left church 30 to 40 years ago and others, five to ten years ago. Still others hadn’t found a place of worship that was right for them since moving to the area.

“Some people left church when they were young. They walked away from God and they haven’t been involved since,” Michelle tells us. “To some degree, they’re unchurched because they have that one early experience with their inherited faith, instead of their chosen faith.”

She led them through what she was thinking she wanted to do – to create an outreach ministry serving the new mission field of our own backyards – primarily for those who have left traditional church. After receiving feedback, Michelle came away with some helpful information. She then invited people interested in what she was doing to an Easter sunrise worship service, which was Ekklesia’s first official meeting. After that, they got together periodically and talked about God, read books, and learned about sacred dance. Because they didn’t have a fixed space, it freed them up to locate venues that would fit the particular service.

“We didn’t look at what we could do within the confines of four walls,” Michelle shares. “We are a church without walls.”

This structure made the transition to online gatherings easier for Ekklesia after the COVID-19 pandemic hit. Participants meet on Zoom every week, where they bring the best of their own faith journeys. And yet Ekklesia is more than just a series of virtual gatherings. It’s an inclusive faith community, encouraging all to keep moving forward on their own path to God. Michelle believes that real spiritual growth happens in intimate settings, so Ekklesia is being developed as a collective of small groups.

“Some people like going into a new church that’s big, because they can disappear until they’re comfortable,” she says. “So this might be a little intimidating.”

Creating a safe space of radical hospitality has thus become an important aspect of Ekklesia for Michelle. She avoids using vocabulary that would alienate the de-churched and eschews membership.

“We don’t teach a particular theology,” she adds. “We inspire people to keep exploring and discovering by exposing them to different theologies.”

To that end, Ekklesia features guest speakers such as the Rev. Hannah Fitch, a member of its theology team, who introduced participants to ecofeminist theology, and Rev. Ronnie C. Lister, a founder of The International Center for Labor, Social and Spiritual Activism, who discussed Black liberation theology the Sunday before Martin Luther King Day.

For Michelle, Ekklesia is about getting people to the Table.

“I’m not looking to convert anybody, but if I had a Muslim friend come be part of these conversations around faith, he could hear why Jesus works for me, and I could hear why his faith has led him down this path and kept him close to God,” she emphasizes. “Without the conversation, neither of us ever get there.”

Michelle adds that she’s under care of the North Carolina region and working toward being commissioned. Ordination may come down the road, but that’s not where she feels she’s being led. Michelle refers to herself as a shepherd, one who makes sure Ekklesia’s conversations stick to its tenets of loving unconditionally, celebrating differences, seeking joy, and being a catalyst for positive change.

That’s not to say that she doesn’t take her leadership role seriously. Last year, Michelle and her team attended Leadership Academy, an annual event hosted by New Church Ministry that empowers leaders, regardless of their denominational affiliation.

When we ask her what to expect at an Ekklesia meeting, she holds up a neon green notebook. Michelle explains that every new participant receives one, even if journaling isn’t their thing, because she wants to at least provide them with a resource, a holding place for their thoughts and feelings that they can turn to at another time. As she describes it, journaling can be a way to meditate – after all, the simple act of writing something with a pen and paper requires time and attention.

“If nothing else, you’ll see it,” Michelle chuckles, “and be reminded of the circle of people who love you.”

Other than a brightly colored notebook, participants in an Ekklesia meeting can also anticipate thought-provoking discussions shaped and formed by other attendees. After her friend and chairman of the board, who left the Catholic Church when he was 13 years old, came to her asking about her thoughts on original sin, she decided to do a series on “big God questions.” Michelle admits that she began to interrogate what she was taught, where her beliefs came from, and if she still held them today.

“I really started thinking harder about my answers,” she recalls. “And in doing that, I was then excited to share the Bible with the group because it’s been a wonderful source of inspiration, hope, and wisdom that I put on a pedestal.”

Michelle is careful to point out that she doesn’t bring in the Bible to teach others her way of practicing her faith, but to inform their own personal faith journeys. She knows that others have different interpretations of Scripture and all she can do is share what works for her and why.

“So they get a ton of my Jesus stories,” Michelle laughs, “and a ton of my Holy Spirit stories!”

Over the past couple years, she says that she’s learned to step back and be more sensitive and unassuming as she’s gotten Ekklesia off of the ground. Michelle advises other church planters to trust the spirit and allow themselves to be open so that God can work through them.

“Let me tell you, if I had done what I thought needed to be done,” she jokes, “I probably would have pushed some of these people away!”

While 80% to 90% of Ekklesia’s participants identify as Christian, others see themselves as spiritual instead. It’s not that they’ve abandoned Jesus Christ’s teachings, Michelle clarifies, they just got frustrated with the people and the politics and decided to walk away from organized religion.

“They still love God and believe in Jesus,” she says. “They think we could easily build the kingdom on earth, if we would all just do our part.”

When we ask Michelle how Disciples can do their part to support new faith communities like Ekklesia, she encourages them to contribute to the Pentecost Offering, which divides gifts between the Regions and New Church Ministry. New Church Ministry uses gifts from this Special Day Offering to develop and maintain programs such as coaching and New Church Hacks.

“New Church Ministry’s resources and training help Disciples develop new ideas on how to do church,” she summarizes. “The biggest leap I made was the day I realized that just because I wasn’t specifically teaching a certain way, didn’t mean that I wasn’t doing important work to fulfill the Great Commission of making disciples.”

The Pentecost Offering is collected in most congregations on May 16 and May 23.

2 thoughts on “Finding a path to God with Ekklesia Global”