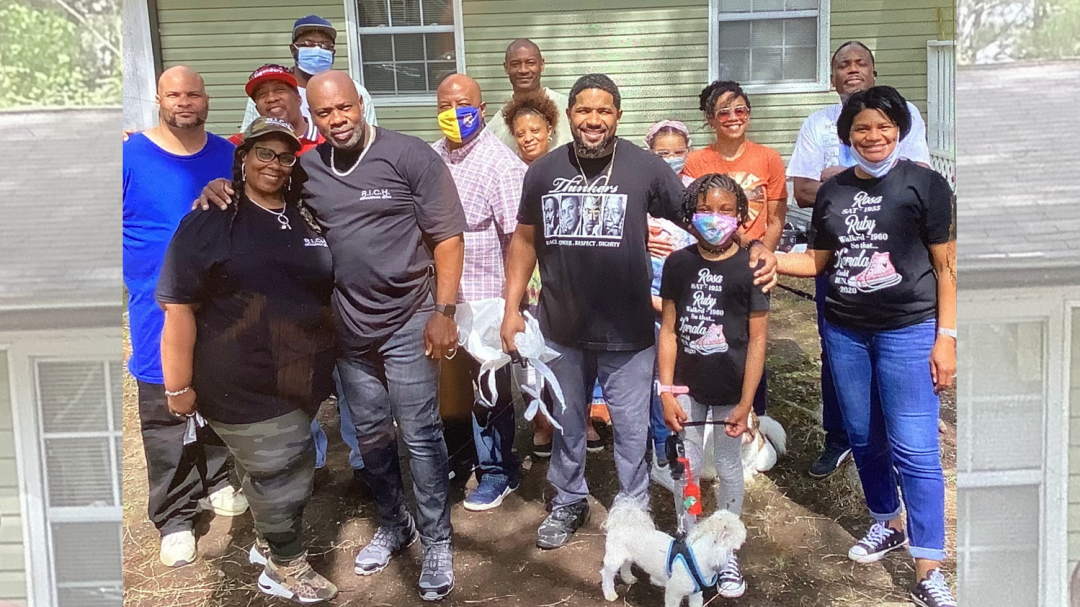 But that changed when he became a prison chaplain in North Carolina, where he noticed a disconnect between church and prison.

In a recent video call with New Church Ministry, Rev. Dr. Louis tells us that there’s both a lack of prison ministries and congregations doing prison ministry well.

“In Matthew 25, Jesus asks ‘did you visit me?’ Churches will use that text to check this box off, even if they do little more than stop by,” Rev. Louis says. “Others will come into the prison and preach fire and brimstone.”

Attitudes toward those who have been incarcerated are not much better after they’re released.

According to Rev. Louis, when someone is released from prison and enters into a church, a simple introduction can be very uncomfortable, as some struggle between revealing that they’ve been incarcerated and having their past exposed or waiting until somebody finds out and then being treated differently.

So he asked himself, why not have a place of worship that welcomes everybody?

In February 2020, after several discussions with God and confirmation through friends, Rev. Louis and others pressed forward with planting a faith community for those impacted by incarceration, including those that served time, are currently serving time, and their families, as well as those that work inside these institutions. The pastor counts himself as a part of this community, as one of his best friends and several of his immediate family members have been incarcerated. For example, his sister spent 17 years behind bars, but is out now and doing very well.

“I know what it’s like writing to somebody who’s locked up, visiting them, talking to someone through a glass window, wondering when you can see them on the outside,” he says, “and I know what it is like beholding the joy when they’re released.”

Rev. Louis’s prison coworkers would say that he was doing time just like the inmates, but he knew the difference was that he could leave when he wanted to.

“I can never fully understand the experience of somebody who has been incarcerated,” he clarifies.

Being on the other side though hasn’t exactly been easy for Rev. Louis. The United States has the highest incarceration rate in the world and it’s continuing to rise. The rates for African American males have gone from one in 12, to one in eight, to one in three.

“Seeing that increase, and witnessing the vast number of persons of color inside, especially as an African American man, has been challenging,” he admits. “So have the conversations with people that have served their time, have been released, and returned. Some of them informed me that they recommitted just to get back in for a peace of mind and less responsibility. Unfortunately, this is a challenge for many who do not receive the support that is needed, especially the kind that can come from the church.”

So in the middle of the COVID-19 pandemic, Rev. Louis and others started developing a community of faith focused on incarceration. He knew that he could wait until he had more funds and more planning, but that this need was too great and urgent. So in June 2020, Cities of Refuge Christian Church (DOC) was launched.

When we inquire about his involvement with New Church Ministry, he gives high praise to Pastor Terrell L McTyer, Minister of New Church Strategies.

“Pastor Terrell has helped extend some of this vision that God has put on me,” remarks Rev. Louis, “and been able to help formulate some of my radical ideas.”

In addition, he is grateful for the spiritual guidance through others such as his pastor, Bishop William J. Barber II and NC Regional Minister Bishop Valerie Melvin. (Watch Cities of Refuge Church’s video that was shown at the recent Regional assembly.)

Participants gather on Zoom and there are plans to explore sites in the area between Durham and Hillsborough once COVID-19 restrictions ease. As for the name, Rev. Louis turned to the Old Testament, when the Israelites were crossing over the Jordan River. In Joshua 20, God tells Joshua to set up cities of refuge. Those that have committed a crime can flee to one of these cities and be received without judgement, and protected and loved.

“There’s a lot of cities of refuge that focus on refugees, those that have been pushed to the margins, those in the LGBTQ+ community,” Rev. Louis says. “But you rarely see any that particularly serve who the scripture talks about.”

People tend to point out that these cities of refuge are for those who have committed a crime unknowingly. Rev. Louis counters this argument with Matthew 5. In the Sermon on the Mount, Jesus says, “You have heard that it was said, ‘An eye for an eye and a tooth for a tooth.’ But I say to you, Do not resist an evildoer.” He goes on to say, “My father rains on the just and the unjust,” and to greet everybody even the least of these. Rev. Louis then presents the case of Barabbas, who was serving a life sentence for murder until he was released by Jesus.

“How can we pick and choose who we invite into the church?” Rev. Louis questions. “I don’t believe that’s the God we serve. That’s not Jesus. In fact, many forget that Jesus was an inmate.”

So Cities of Refuge Church’s congregants include people who have been incarcerated, those who have been impacted by incarceration, and others who are passionate about the work that is happening. Their worship services are like any other services – they have music, invocation, prayer, and scripture reading. Every Sunday, Rev. Louis intentionally sets time aside for testimony to hear celebrations. In our ministry’s interview with him, he offers two examples. One is of a worshiper who sang in a prison choir, was released, and now continues his passion for music with Cities of Refuge. He shared with the church that he was able to get his ankle bracelet removed and is no longer on curfew. Another is of a member who was serving a life sentence and was released after 29 years. This individual shared the joy of receiving his driver’s license and insurance.

“These brothers are putting everything on the table, keeping us on track with what they are doing,” explains Rev. Louis. “So we stopped and put our hands together to celebrate these wonderful accomplishments. Getting a driver’s license might seem like a small achievement to a lot of people, but this is huge for him and us.”

Rev. Louis tells us that for his brothers and sisters at Cities of Refuge (COR) and elsewhere across the country, finding somebody after they get out—other than a judge or a probation officer—to hold them accountable, to check on their spirit and peace of mind, and see how things are going and offer support, is essential. That’s why he and his associate ministers and other members build relationships with individuals before and when they come out. Rev. Louis believes that strong support systems, like families and religious groups such as his, will decrease the recidivism rate.

In addition to worship, COR visits homeless shelters and transitional homes at least four times a year, but supports them on a monthly basis. Rev. Louis shares with us an experience of a trip to one such transitional home that he and others at COR had previously been to. On their second visit, an employee there informed them that a neighbor was shot and killed the night before, so he and his staff were hesitant about letting COR return. In the end, they let them visit and serve.

“I’m glad that they did,” divulges Rev. Louis. “We were setting up to do a fish fry and community give away, when a woman approached us and said that people living nearby were sad and heartbroken over the killing of the young man, but our congregation’s presence was bringing them life. So we prayed, gave out food, and blasted music. It was a great joy to help this transitional home and the neighborhood in the midst of pain.”

He and his colleagues anticipate making more consistent visits this year as well as providing educational and partnership opportunities to those who have been impacted by incarceration. Additionally, the congregation has a faith team with the Religious Coalition for a Nonviolent Durham and Rev. Louis is one of the facilitators that helps mitigate sentencing and reduce recidivism.

He hopes that COR can lead by example and change the narrative when it comes to the church supporting those impacted by incarceration. Helping them to reintegrate back into society without feeling ashamed, nor scrutinized but supported in every way. If other congregations can see that returning citizens and those who have been convicted of a crime have done their time, guilty or not, can further help strengthen the church as part of the body, then maybe they’ll consider forming a prison ministry, reevaluate the one that they have, and/or how they’re currently doing ministry as a whole.

“These people coming out are not just inmates,” he emphasizes, “they’re our brothers and sisters.”

To support churches like COR, make a gift to the Pentecost Offering, collected in most congregations on May 16 and 23. This Special Day Offering is divided between New Church Ministry and local Regions.