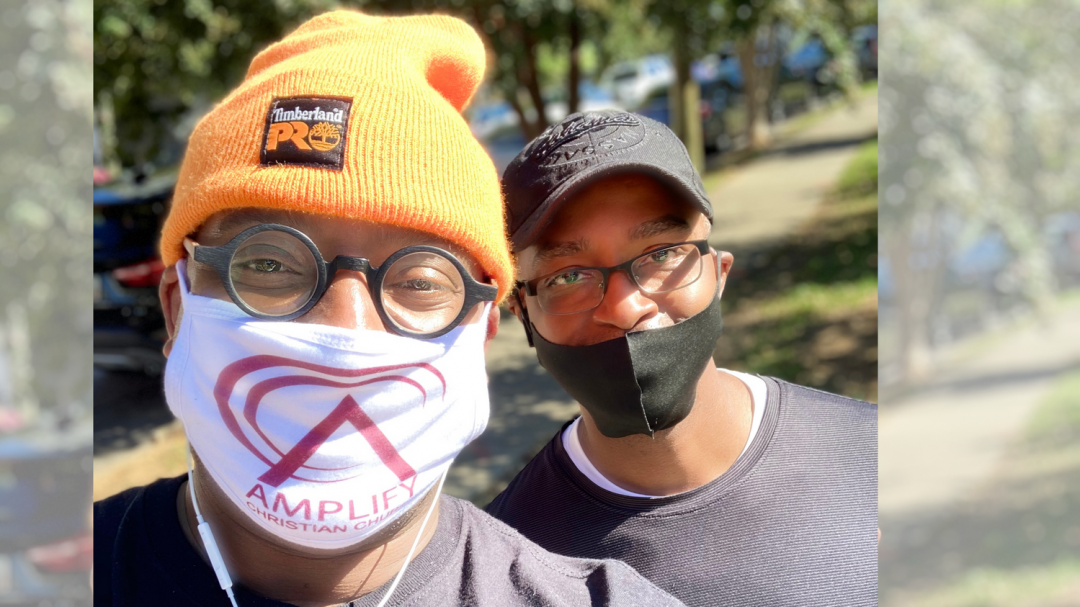 As a chaplain at Northside Hospital in Lawrenceville and Duluth, Ga., he had just spent time in comfort care with a dying patient and her boyfriend, who had been brought down from another floor. Rev. Orlando is busy turning on lamps in his office to improve the dull clinical lighting and apologizing for his tardiness when he joins our video call.

Even though we ask if he wants to reschedule, Rev. Orlando replies that it isn’t a problem, this is everyday life for him and his colleagues, including the intern who pops into the room to confirm his patient’s death.

As we get to know Rev. Orlando better throughout the afternoon, our ministry comes to understand that what he says rings true: journeying with people as God meets them where they are is part of his day-to-day life, whether it’s virtually gathering on Wednesday nights with members of his new congregation, Amplify Christian Church (DOC), or urging legislators at the Georgia state Senate to love the homeless as much as they love the homeowner, or even handing out food to local residents.

“I just want to be a helping hand, a listening ear, a compassionate heart,” he tells us. “That’s the way I approach pastoral ministry.”

Before he launched Amplify Christian Church last year, Rev. Orlando was on the team to create mental health awareness and advocacy programming for pastoral leadership in his region as part of its mental health initiative. As a hospital chaplain, he regularly interacts with folks experiencing mental illness, so he went from asking himself, “how do I become aware?” to “how do I become a partner?”

This way of thinking has served him well, especially since he planted his faith community right at the beginning of the COVID-19 pandemic. At that time, he had several conversations with the former Regional Director of New Church & Church Development, Rev. Richard Williams, about the different sites that the Christian Church in Georgia was looking at developing, including Snellville, a city not 10 minutes away from where Rev. Orlando lives. He asked to look at the building and if anyone occupied it. It turns out no one was, so Rev. Orlando began to develop a ministry there. He brought relatives and others that live in or near the community to the site, and asked them what they envisioned for it. The plan was to open in March of 2020, which, for obvious reasons, did not go through. But what did end up happening was numerous calls with friends who were anxious about the state of the world. Rev. Orlando initially responded by organizing an online Bible study about anxiety, that has now moved on to studies about mutually supportive relationships. On Zoom meetings, he and his friends have explored the Book of Ruth, and how the three women in the story sustained each other over time through their crisis. Rev. Orlando has found that creating vital relationships during the past 13 months has been essential as people still need ways to communicate with each other. This last quarter, the topic of his weekly conversations has been how to love and grow in community, even in the midst of continued isolation.

The number of congregants has grown too, from six to 11, as family members and friends join. Rev. Orlando also welcomes those from different faith traditions and even those without a faith tradition.

“On a day-to-day basis, I meet people in all types of circumstances and spiritual or religious traditions,” he shares. “These exchanges undergird how I envision what church or a pastor should or could be.”

And yet, he’s wary of adding additional participants to his meetings at this time, as he doesn’t want to lose the dynamic he’s built with his fellow worshipers. Many of the people Rev. Orlando’s met through Amplify have experienced church trauma, but find his space one of fellowship, healing, and development – one where they can become the person they were called to be. As he discusses his faith community, it seems that the environment he’s cultivated is due to the way he does ministry.

“You’re the expert on who you are, and your spirituality,” says Rev. Orlando. “I’m not going to force you into some type of ideology. I don’t know your experience. In chaplaincy it’s called being an intimate stranger – we walk in this intimate space together, but I’m still a stranger.”

While he views his work at Amplify as meeting needs the way that most other churches are, Rev. Orlando describes his approach as non-traditional, something he picked up as the secretary of the National Benevolent Association (NBA)’s Board of Trustees. Seeing all of the NBA’s different health and social ministries across the United States helped him think outside the box.

“Historically, the Church has wanted numbers, to open up the doors and find a way to get people in,” Rev. Orlando says. “For me, it’s about learning to build trust, so that people can feel that we are investing in them, not just extracting. As I invest, I want people to do the same, so that we have this mutual exchange.”

On that note, we ask the pastor/chaplain/church planter what it means to him for Disciples to contribute to the Pentecost Offering. Half of the gifts made to this Special Day Offering go to New Church Ministry to train, equip, assist and multiply leaders through programs like Leadership Academy, coaching, New Church Hacks, and Water the Plants. The other half stays in regions across the Christian Church (Disciples of Christ) in the U.S. and Canada to support local new church development.

“For me, to be able to receive those gifts… it’s doing the ministry of Jesus Christ, creating opportunities to meet particular needs of folks around us,” muses Rev. Orlando. “And to be able to share the love and compassion of Christ in a tangible way.”

While “tangible” may not be the best way to describe a virtual faith community, Amplify has done some work on the ground. Since June of last year, it has partnered with the county once a month to give away 200 boxes of produce. It has a similar collaboration with a local high school, which lets students and families know that boxes of food are available to be picked up.

“Two people started out giving produce, then it grew to three, five people,” he recalls. “It doesn’t take much, just an idea that you want to give of yourself and provide a space to help others.”

Rev. Orlando sees food sustainability and serenity as future goals for Amplify. He hopes that through a community garden, he and others can provide organic food to their neighbors, helping people reorient the ways that they consume and produce food, as well as relate to the land around them. Along that vein, Rev. Orlando also looks forward to offering horticultural therapy to the community as a way of cultivating spirituality along with emotional wellness. Others in his circle may have other plans.

“People are still wanting to gather and meet each other, but we’re not going to do that,” he laughs. “We have talked about doing a retreat in 2022 for us to all get together, probably in the Blue Ridge Mountains, but it’s not going to happen right now.”

As our hour together comes to a close, we ask Rev. Orlando for any parting words.

“In our worldview, we sometimes have a scarcity mentality, but each of us have talents and abilities,” he opines. “If we use that for mutual growth and development, there is no lack.”

You can support new faith communities like Rev. Orlando’s by making a gift to the Pentecost Offering, collected in most churches on May 16 and May 23.

2 thoughts on “Navigating death, intimacy, and the palpable nature of online church with Rev. Orlando Scott”